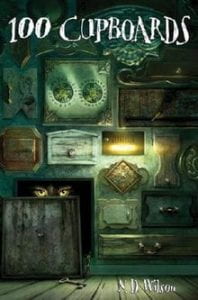 Henry is twelve and has been sent to live with his uncle and aunt, along with their three daughters, in a small town called Henry. See, his parents (who were overprotective yet barely knew him – how dare they!) have been captured, possibly to be held for ransom. Meantime, in his new house, Henry has discovered that there are 99 cupboards hidden behind the plaster in his room, and he and his cousin, Henrietta, learn quickly that there is strange magic afoot.

There was a lot I really enjoyed about the book – Henry’s a good guy with some strengths and fears, all brought out nicely by his aunt and uncle, who both rock. But I couldn’t understand why you would have a massive event such as captured parents, that barely gets referred to. Henry doesn’t even seem to care in the slightest that they are gone. Seems odd to me; perhaps it would have been better to have a less dramatic premise so that we don’t mind the focus being on the rest. Although there are at least two sequel books to this, so perhaps the answers are yet to come.

I would recommend this book to those who enjoy reading kids books, although it may be a bit too adult for kids and a bit too kiddish for adults.