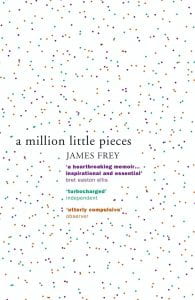 This is the story of a very broken twenty-three-year-old who ends up, after years of addiction and abuse of alcohol and a variety of drugs, in rehab. it was originally marketed as a biography, but in a huge scandal (involving Oprah Winfrey and her book club) it was revealed that it was a fiction – albeit based on Frey’s life, but none-the-less, fiction.

I found James Frey’s writing is extremely poetic even in all of its horror. While I didn’t like the story, I also totally loved it. I had a few issues with the fact that this main character is such a turd who won’t listen and you just know that his life is going to go bad. And yet, I really liked him and wanted him to get through.