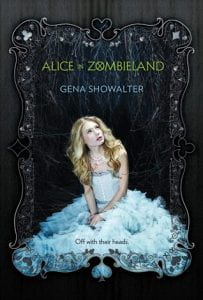 With a title like that, I expected a story based in the original world of Alice in Wonderland but with zombies. But that’s not this book – set in the present day in the US, Alice is a girl who grew up with a father who appeared to be mentally ill – he kept the family in during the night hours in a secure house and drank heavily to control his fears. It is only after a car accident that kills her family that Alice realises that his talk of monsters is real – and she needs to do something about it.

There are a lot of similarities between this and several other Young Adult fantasy novels – the playing out of the romance, the secrecy, the disbelief. What makes it stand out? Well, zombies are pretty unromantic, and the amount of injuries that Alice sustains and has to explain away. Throw in some conspiracy and it’s a pretty fun tale. At this stage, there are four books in the White Rabbit Chronicles, and I’m not sure that they will sustain my attention, but let’s see!