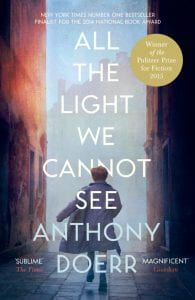 Marie-Laurie LeBlanc is taken by her father from their home in Paris to the small town of Saint-Malo, fleeing from the Nazis. He worked at the Museum of Natural History, and when he flees he is given one of four diamonds to protect. Three are copies, and one is the original – the “Sea of Flames”, a gem with a curse. Marie-Laurie is blind, and her loving father makes beautiful little models of the places they live so she can find her way around. Then, there is Werner Pfennig, a German orphan who has a talent for fixing radios and other electronics and is absorbed into the Hitler Youth. And Nazi Sergeant Major Reinhold von Rumpel, desperately searching for the Sea of Flames.

This is not your typical war story. It is beautiful and terrible and absolutely no wonder it has been critically acclaimed. I loved it, with its very short chapters that dole out the story slowly. It broke my heart many times, but in that way that is a good pain.