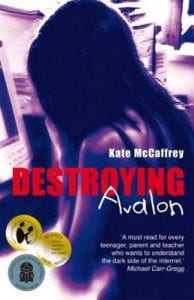 Destroying Avalon is written by Kate McCaffery and it is set in Australia. The main Character is Avalon – a 4-ear-old girl who moves from the country to the urban streets. Avalon has a little sister named Ruby and a Mum and Dad. Her parents move to the suburbs for their work and for the first time ever Avalon goes to an urban school. It’s quite different from her old country school but she gets used to it.
The story is based on cyber bullying. Avalon joins a group of friends who are considered “outcasts”, “queries”, and “lessos”. There’s this one girl who bullies Avalon and Marshall to the point where Marshall commits suicide. As this is done through the internet no one knows who Dragon Girl is but after Marshal’s death she owns up. Sukey, the main girl of the “outcasts”. The whole time Avalon and Marshall’s best friend hid behind the screen and causes collateral damage.
This happens over the span of less than 6 months, from which Avalon almost drives herself to the point of death as well. The true betrayal of the person she thought she could trust “Destroys Avalon”. Avalon and Marshall were best friends and even though they were in the same situation, neither one could help each other.
I love this book because it shows how such a little thing and such cowardly acts can cause undescribable damage. The moral is that although something may be happening to you, you shouldn’t blame the one predictable person, Avalon thought it was Alice (the bitch of the school) but turned out she never had anything really to do with it and that it was Avalon’s best friend. Never trust your enemies nor trust your friends.