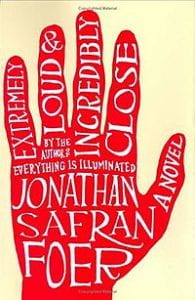 Oskar Schell is a young boy whose father died in the September 11 attacks in New York. He was already an unusual character, but in trying to find his way through his grief, he needs to go on his own journey, seeking clues that might help him understand things that have happened.

I just love this so much. Oskar is such a tricky character, and seeing his mother and the world around him through his eyes was fascinating. And then there are the other stories; the stories of his grandmother and grandfather and the war and of immigration. Told in such an unusual way; such a wonderful way.