Growing Up Aboriginal in Australia edited by Anita Heiss 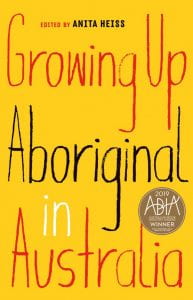 This collection of essays and poetry is huge – so many contributors, with so many stories. Many are beautiful and happy, writing about family and love and good times. But there are common themes – so many who grew up dealing with prejudice because of their Aboriginality, and often at the same time being told that they couldn’t be Aboriginal because they weren’t black enough. It’s hardly a surprise, given how long and until how recently the Stolen Generations were happening, that most contributors at least mention how it happened in their family. Culture and connections lost, some being found again later, some lost forever. But another common theme was strength – making things better and showing pride in heritage and culture.