The Color Purple by Alice Walker 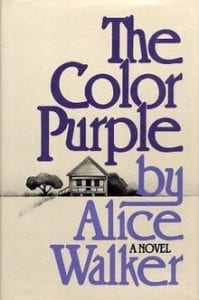 Celie lives in a small community somewhere in the deep south in the early 1900s. She’s abused by her father and then sent to be the wife of a widower with several children where she is further abused and treated like a servant. Her one ally was her sister, Nellie, who was torn from her and Celie doesn’t know where she is. But she survives, year after year, writing letters to God.

This is one of my favourite books. Celie’s journey is hard and long, and it takes her a long time to figure out who she is. But she survives despite all of the  hardships. I came to this book after loving the film as a teenager, and I’m so glad I was led to it, and to the work of Alice Walker.