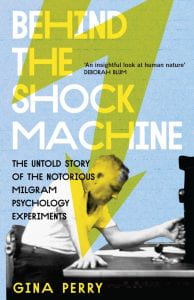 Most people come across the Milgrim experiments when talking about what people will do when instructed by authority. In 1961 when researching at Yale University, Milgram recruited people to take part in an experiment where they had to administer shocks to a stranger in a different room. And it went pretty far – even to the point where the recruited person thought they had injured or even killed the stranger. Milgram’s intention was to show that anyone could have ended up working in a Nazi death camp as people are made to obey orders.

Perry followed up with some of the scientists involved as well as participants, and she found a lot of issues with the way the test was designed, administered and even on the follow up for participants. It’s fascinating.