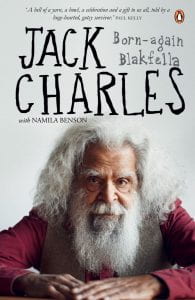 Jack Charles is a Boonwurrung man, a local activist and a leader in the Melbourne community. He had a tough start, taken from his family during the Stolen Generations and placed into a children’s home. This books covers much of his life, the good and bad. It’s a great read because his generosity and positivity shine through, even during the hard times. He’s not ashamed of things he’s done in his past, though he also doesn’t glorify them. And while he is angry with the policies that tore his life and his family apart, he sees hope and ways to move through in the future.