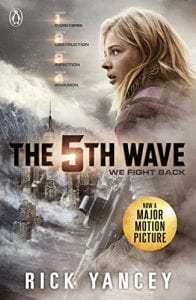 So there has been an alien attack which has happened in four waves, devastating the world’s population. There are now few people left, and Cassie is one of them, but the aliens no look like people. She is fighting to stay alive, living on her wits. Should she try to find other survivors? Who can she trust?

As far as dystopian future stories are concerned, this is a good one.  I like that it is an alien attack, and that no-one knows who to trust.  Some parts seem overly familiar, perhaps because they are extremely similar to other books of this genre. But overall, it’s a fast, action-packed read and I enjoyed it.