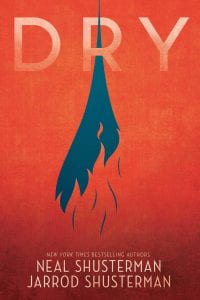 In the real world, we are seeing Greta Thunberg leading the fight to try to halt (or at least reduce) climate change, and the ugly responses of adults who don’t want to hear this message, least at all to hear it from a 16-year-old who seems to be impervious to all their horrible words. Then I read Dry, the dystopian novel set in the not too distant future in California when the taps have run dry, and it feels like, with our current approach to climate change, we’re almost there.

“The kitchen faucet makes the most bizarre sounds.” When Alyssa and her mother discover that the water is off in their house, they think it must be due to Alyssa’s father’s mysterious attempts at DIY plumbing. The news reports suggest that this is a temporary problem and that everyone simply needs to remain calm and reduce water usage, but it is quickly apparent that it is far too late for that. There’s no water in the taps and hardly anyone is prepared for this. When the desalination machines are going to be switched on at the beach, Alyssa’s parents go to get water for the family leaving her in charge of her little brother, Garrett. But when they don’t come back, it soon becomes clear that they are going to need to fend for themselves.